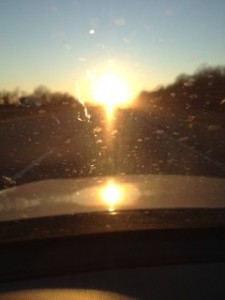 I left Atlanta this morning on a road trip that has been 30 years in the making. In 1982, my brother Tom drove our grandfather’s old (1960′s?) F-85 from Gainesville, Georgia to Eugene, Oregon with four friends, their bicycles and all the equipment they thought they would need(please weigh in here, Tom)for the trip home. He sold the car for $75.00 and began his journey eastward across the continent. I have romanticized that trip for thirty years and am finally acting on my desire to do the same- albeit in slightly more comfortable transit, and in reverse. My plan is to end up in Malibu, California and make my way back. More on that later.
The goal for my first day was to travel the 525 miles that would deliver me across the Arkansas River to Little Rock, Arkansas.
I drove to Birmingham, Alabama and then north and west into Mississippi on US 78, identified as the Appalachian Highway. I found it difficult to regard this road as anything other than an Appalachian dead end, preferring the wise, secretive, green hills that I know to this crumbling brown land. Passing towns whose names were redolent of the Creek and Choctaw people who lived here first, I crossed the Tallahatchie River (though not on the bridge made famous by Bobbie Gentry in the 60′s) aware that this was the river that swallowed the beaten body of Emmett Till.
I was spat out of my reverie into an ugly section of congested road that took me through Memphis, Tennessee and over the Mississippi River into Arkansas.
Swampy, brown land gave way to broad, green fields that reminded me of Holland. Large expanses of land on both sides of the expressway were quartered by well-worn berms that rose above the wet fields.
Because of my late start this morning, I was pushing to arrive in Little Rock by sunset. Be careful what you wish for…  I was still an hour away from my destination as the winter sun began its perilous descent directly in front of me. I have a postcard on my studio wall of Louis Kahn’s magnificent Salk Institute in La Jolla, California. He incorporated into its design a runnel that bisects the property and appears to empty straight into the Pacific Ocean. My postcard shows the runnel at sunset, the setting sun balanced perfectly at its mouth. Headed into Little Rock on I-40, I was reminded of that scene as I struggled to trail the giant truck in front of me, its outline all I could see in the blinding sun.
The reward for that travail was the calligraphy of distant winter trees against an expanse of coral sky once the sun dipped below the horizon.
I arrived after dark, but with no problem, and checked into my hotel near the river.
I walked under a full moon,an auspicious beginning, to a pub around the corner where I sat at the bar with my book- John Steinbeck’s Travels With Charley- and wrote some notes about my first day while I enjoyed my dinner with a glass of wine. Tomorrow 600 miles to Amarillo, Texas. Pictures to follow.