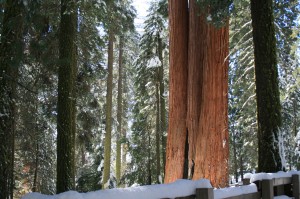 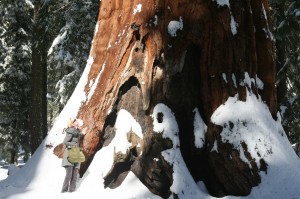 Above is my first contact. I am appropriately awestruck. Below,rock mortars where the Yokut women ground acorns for food, and pictographs from pre-history made by an unknown people who simply passed through this land but never settled. 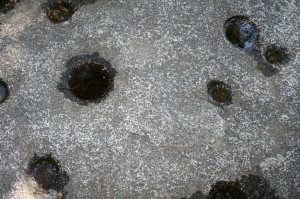 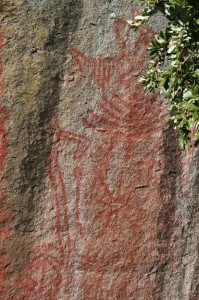 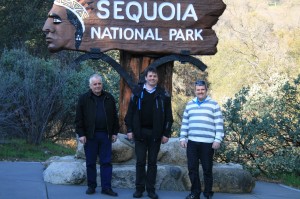 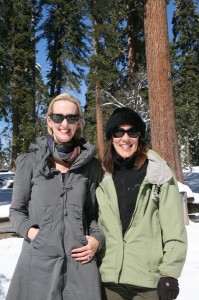 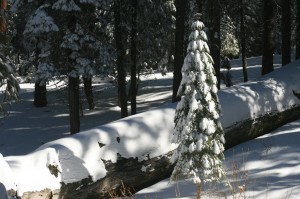 The tanenbaum in the foreground beside the fallen tree is a young Giant Sequoia. They begin the size of a tiny oat flake dropped from a pinecone. If these trees can create themselves from such humble beginnings, we can do anything!

All of the exhaustion and uncertainty of the night of my late, dark arrival was banished by the bright morning light. I enjoyed a lovely breakfast by the fire with Leah in her  Three RIvers Bed and Breakfast before running up the hill to join my guide and fellow pilgrims for the short ride to the Sequoia National Park and the Giant Forest.

Since I was the last one on the van, I got to ride shotgun the whole day. My perspective was wonderful as we made our way up and into the Park. I always got first glimpse of everything and could hear everything Stephanie had to say. She was a wealth of all the kind of information that I wanted, and seemed to anticipate my every question. Well, that must not be quite true, because at the end of our day one of my fellow travelers who had said nothing to me all day came over and asked, “So, are you making a documentary, or what?”

I did ask a lot of questions, some of them arcane I am sure to the rest of my group – especially since three of the six were from Norway and relied on their younger member to translate almost everything Stephanie said. From them I learned a few Norwegian words and phrases. The easiest and my first being one word for snow. I asked our English speaking Norwegian the word and he said,  ’snuh.’ And I said, “yes, snow.” He said, “snuh.” He was telling me the word in Norwegian. It is spelled sn and then the o that looks like the greek letter phi.

It was all beautiful and a day I will never forget even though I have mostly forgotten the way I felt when I arrived. How could I feel otherwise after standing humbled among the greatest living things in the world?

Imagine standing before a living thing that is over 2000 years old. The Giant Sequoia is almost indestructible and has changed very little, if at all, from its ancient beginnings. There is such a grace in its power, and in an odd way, seeing these giants among the other trees of the forest  made me think of Yonah, my 125 pound black dog, who also seems to have no idea that she is so much bigger than the rest. It engenders a kind of tenderness toward her, and I felt the same way about these trees.

It is a miracle that anything at all survives the vagaries of nature, yet here we both stood, testament to an incredible design.

We walked the forest, had a lovely lunch at the top of the Park at the Wuksachi Lodge, walked to see General Sherman, the largest living tree- by volume, that is. The stats keep changing, but who cares in light of this kind of majesty? It was so named  in 1887 (9?)by cattleman James Wolverton who had served with the eponymous general in the  9th Indiana Cavalry during Civil War. Interestingly enough, this name supplanted its former name of Karl Marx.  (Yes,really!)  Given it by the Marxist-inspired utopians of The Kaweah Colony who lived and logged there in the early 1880′s. (Are you beginning to understand why my companion asked me if I was making a documentary. She just wanted to see the trees…)

We saw all the grandeur of time’s markings and saw reminders of the vanished people who lived here long before we designated it as our nations’s second National Park in the late 1880′s.

I am grateful to Leah and Peter for providing such a welcome place to stay for my visit and to Stephanie of Sequoia Sightseeing for sharing her generous and expansive knowledge and her love of place with me.

Stephanie, if you read this, please send your last name. I never recorded it.  Thanks for the directions to Malibu. And remember to look me up when you come to Atlanta.

If you consider a trip this way, make sure to call on Leah Launey at www.threeriversbedandbreakfast.com. She and Peter can help in every way.