Martin was right! Sitting outside on the deck,our feet toasty by the fire, a cool breeze blowing off the ocean, it was easy to imagine that we were on the set of a utopian movie. There is a narrow road that runs the perimeter of the Cove and passes right in front of our friend’s deck. Crossing my field of vision, when I took my nose out of my book,were butterflies in the bougainvillea, a twelve year old boy on his bike pulling along behind him a tiny terrier dressed in a black jacket, a silver capped lady pushing her walker along at a vibrant clip, a FedEx truck (most startling of all), a gardener who tipped his well-worn baseball cap as he passed, two hummingbirds chattering at each other as they flew right over my shoulder, the occasional helicopter patrolling the coastline or squiring papparazzi intent on invading the privacy of those better known than I. Best of all were the pterodactyl pelicans who flew by at eye level, single file, scouting the seam of land between sea and cliff in front of a backdrop of arabic glyphs of white clouds in a soft blue sky.

Martin and I walked down the beach for lunch and as soon as I write this will spend the rest of of our afternoon as we spent our morning. On the deck beside the fire with our books and thoughts and conversation waiting for Barb and Cori in the blue of Goethe’s ‘enchanting nothingness.’ 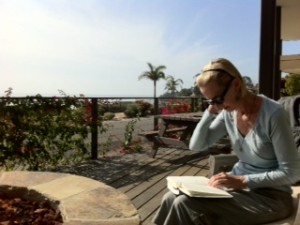 My new favorite perch, thanks to a very generous host.

A word about yesterday with a few pictures from our visit to the Getty Center: 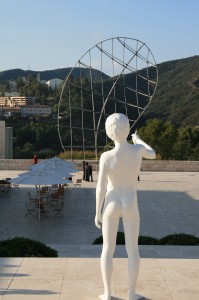 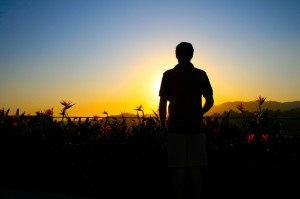 Martin silhouetted by the setting sun from high atop the Getty Center. 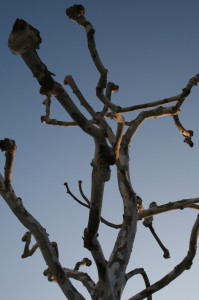 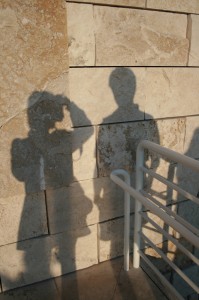 The setting sun behind us.