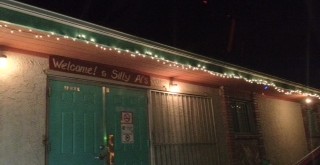 Barb, Cori and I packed up the car and reluctantly left Paradise after a wonderful visit in Malibu with family and friends, eager for adventure and the new horizons of our journey home.

Our plan was to get far enough out of LA to give us an easy drive to the Grand Canyon the next day. I marked Quartzsite, Arizona, the self-proclaimed Rock Capital of the World, as our first destination. Cori and I are both rock lovers and the streets of this small town are lined for months at a time with itinerant dealers of all things rock and mineral. Parking lot after parking lot full of RVs set up for the 3-6 month season, each fronted by tables covered with its own buffet of turquoise, quartz, “40 million year old mammal bone” and other rocks and fossils from the southwest, some tumbled and polished and others still carrying the dirt where they had been found. My prize was a small white plaster cast of a branch that proved to be petrified wood from the Colorado River. (But I am getting ahead of myself. We didnt know all this yet…this should be tomorrow’s post. That’s what I get for not keeping up.)

But back to Wednesday, Day 17: We arrived in Quartzsite, Arizona after a rewarding detour through Joshua Tree National Park, two hours east of LA. Passing through wind farms of tall, stark white windmills staking claim to barren hillsides. Cori perfectly  described them as doing the backstroke. With talk of Gram Parsons and his particular fate at Joshua Tree, we entered through the south to take the winding drive through the Park. Passing through the Colorado desert region of the Sonoran Desert and entering the high desert of the Mojave, we saw cholla cactus, ocotillo, rounded red and ochre rocks, and of course, the eponymous Joshua trees so named for their beseeching, (some say exultant) arms-raised-to-heaven appearance. We left the Park to take the long way back to the 10, one hundred miles around the north and east sides of the Park, knowing it would lengthen our drive but wanting a new experience. I think it was one of the most beautiful drives of my trip. We took a desert road scattered right and left with small frame houses cobbled out of random colors and sections of wood or old trailers with lots of outdoor “accessories” (these people sure do love Ron Paul- signs for him everywhere.)but were soon in the magnificent company of the Eagle and Coxcomb Mountains. The sun was setting behind us so they shone in reflected light that seemed to come from deep within them. The sky above them was pinkish as was the sandy desert, so some were silver and rose quartz. Others were the plum-purple of a bruise, but the most compelling to me I will describe as blueberry. A deep indigo and with the same powdery gray blush you find on a summer blueberry. Deep and abiding. I will never see a blueberry that I will not think of that twilight drive.

We found our (Not-so)Super 8 -the only motel in Quartzsite – to lodge for the night with the other refugees of the road, mostly truckers who had stopped first at the Love’s on the corner to get their tall boys in brown paper sacks to bring to the room.

Barb had located the better recommended of the two open eateries in town. Silly Al’s for pizza. How bad could it be?

We pulled up, parked our car in the gravel lot outside the double green doors marking the entrance to Silly Al’s and entered an ecosystem as distinct to us as the ones we had traveled through earlier in the day. Red plastic booths lined one wall of a dance hall style interior. The only occupied booth was taken by a family of four, dark heads leaning in busily finishing a pizza.  We slid into another with a view of the bar and the four or five tables across the room on the other side of a parquet dance floor.  A stage at the far end of the room commanded it all, a husband and wife DJ team enthusiastically cued up the karaoke selections of eager and completely un-self conscious participants who clearly all knew one another and for whom this was a special, but regular night out at Al’s.

We ordered a glass of wine- two choices, red or white-and a vegetable pizza. One right after the other, we were entertained by the earnest singers. Most of the selections are forgotten to me now. I wish I had written them down. A few I do remember. though. Note to self:  Meatloaf’s Paradise by the Dashboard Light does not make for good karaoke… Ditto Lady in Red.

As the evening progressed, Cori gave voice to the developing gleam in her eye when she confided to us that ” hmmmm…this could be the night for her.” Barb and I could hardly contain our excitement at the thought, but worked hard to disguise our enthusiasm. We all named songs that we thought would be good choices, even invoking the long distance help of Anna, who knows her karaoke, but Cori ultimately decided upon Build Me Up, Buttercup all by herself. Our urgings backfired on us when she agreed to sing but only if we accompanied her. What were we to do?