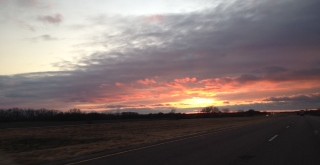 I started my day in Little Rock, Arkansas, and after a long day of driving, covering 647 miles of mostly bad road, I will rest my head in Amarillo, Texas tonight before a much more leisurely drive to Santa Fe tomorrow.
This was planned as my longest drive of the trip, designed to give me more time to enjoy the spots farther along my journey. Still, I found myself several times along the way wishing I could pull off somewhere or another to get a feel for where I was. I saw the whole journey from the other side of a windshield, making only two 5 minute stops in my ten-hour day. My last stop was for gas in Canute, Oklahoma (pop. 541+/-) 47 miles from the Texas State Line. Think The Last Picture Show…
There was a roadhouse right by the highway that looked mythic – a long, narrow wooden building, set back in the middle of a dirt and gravel lot beside an empty road. Nothing beside it; nothing but open field behind it. One streetlight stood alone in the lot and an old lamp crooked out over the sign that hung above the front door. Faded brick red walls with a green painted metal roof hanging low. Pickup trucks noses in around its perimeter. What stories it would hold inside… I will never know any of them, because it was just below freezing and starting to spit sleet when I noticed it as I pulled away from the gas station. I wanted to get closer to Amarillo before dark. That, and the fact that I don’t want my mother to have to read that I even considered going in, much less followed through even if  just to see what it was like.

All day I kept an open spiral notebook in the seat next to me and a pencil in my lap so I could write down names of places or words to trigger a thought I had wanted to record.
Alas, the notebook, a palimpsest of penciled thoughts, is still in my car and my car is downstairs in a very cold, windy parking lot that is covered in a dusting of snow, so I will try my best to remember most of what I wanted to say without it.
Leaving my Little Rock hotel this morning, I asked directions to get back to I-40 , simple enough, and the desk attendant responded with simple instructions taking me to I-30 E that would lead me directly to I-40 W. She left out the 430 N part in between, so I wasted a little time getting back where I needed to be without a map. I have written all of my directions in my notebook – I know… I know…- so I dont have a map, just a general sense of where I want to go and an oversized faith that it will all work out.
Anyway, I have decided that Siri and I need relationship counseling. We do not understand one another and cannot communicate effectively. Her response to my query about how to find I-40 was to say that she “cannot help me find that; there is no such highway in Iceland.”
I figured it out for myself, and after a short delay was back on my way.
Coming into Fort Smith, Arkansas, I came up behind a dirty white moving truck. Someone had fingered into the dust on its back panel the following plea: Helen Leger Please Call Frank, with his phone number underneath the message. Poor guy.. Maybe I can help reunite Frank and Helen by posting this request. I like to think so. I hope I have remembered Franks’ number correctly without my notebook at hand. I tried my best to memorize it.
I entered Oklahoma and was welcomed by a large red, white and blue billboard exhorting me to Discover the Excellence. Just beyond that, written on a small green highway sign, were the words Entering the Cherokee Nation. I stopped at the Oklahoma Welcome Center a few miles further along hoping to find some material on The Trail of Tears and other historical sites related to the removal and relocation of the Cherokee from Georgia and North Carolina to Oklahoma. When I expressed my interest in the subject, and that I was born in Georgia on land once occupied by these people, I received an unexpected and very disappointing response from a man there who may not have been an official representative, but was behind the desk. “Well, he said, thanks alot. You got ‘em off your land and gave ‘em to us.”
I promptly expressed my disdain for his comment and proceeded to tell him more than he wanted to know about the history of the event – but not nearly as much as he needed to know.
I drove on, leaving the Cherokee Nation and passing through those of the Cheyenne, Arapaho, Seminole, Sac and Fox, one I had never heard of- the Citizen Potawatomi Nation, and even the Kickapoo Nation(which reminded me of my youthful resourcefulness and a drink I concocted for friends on spring break when the hotel vending machine had been emptied of every soft drink except Mountain Dew. Mountain Dew and vodka became a straw-colored Haystack and was wildly popular for years to come…but what does this have to do with my drive through Oklahoma??)
I have no pictures to share because of the admonishment of my daughter to take no pictures while I am driving. ALL I did today was drive, so I will have to draw with words.
If I had photographed the countryside today, except for ubiquitous bright orange traffic cones that lined the road, you would never have known if I used color or black and white film. There was no color in the landscape.
The paved highway leading me on was pewter. The guardrails lining it(or more accurately today, the concrete barriers constricting it to one narrow lane!!) were metallic silver. The land outside the rails was sandy gray and peppered with dead-looking shrubs, rising up and away from the road and ending at weathered wood and wire fences that detained the occasional black cow. Even the torn plastic bags caught in the wire and twitching in the breeze were white. Always on the other side of the fences was dry brown grass with graphite trees beyond in the distance. The sky above was colorless, and I was seeing it all through a haze of dust thrown up by the road construction that plagued the entire trip through Oklahoma.

I  passed through Okemah, Oklahoma- the birthplace of Woody Guthrie.

As I traveled through the Cherokee Nation, I remembered a week during a residency at The Hambidge Center in Rabun Gap, Georgia when I taught myself to write the graceful characters of the Cherokee alphabet. And remembered the sound of the Cherokee name I gave our mountain cabin built in the same mountains of North Georgia they had inhabited.
I cant write the words here, but phonetically they were pronounced E-lo-we-hi Ha-na-ni which meant a quiet place. I know my daughter will roll her eyes at this remembrance. I think she considered it an affectation, but it was important to me to honor the past of the place.
As I approached Texas after my last stop for gas, the heavy gray skies behind me gave way to a lovely pink and grey sunset that seemed to linger much longer in the Texas sky than it had in the sky over Arkansas the night before. Maybe the Texans really have earned their boast that everything is bigger and better in Texas. As I crossed into Texas at dusk tonight with 175 miles still left to go in my trip, I thought about how difficult it must have been to settle here and tame this land and that it must engender a certain type of pragmatism and hard, narrow focus that by necessity supplants loftier thought.

The loneliness of the farmsteads that dotted the highway, most with a single light on a tall pole illuminating a yellow yard around a dark house, reminded me of line from a Ted Koozer poem entitled Flying at Night.  Some farmer…/snaps on his yard light, drawing his sheds and barn/back into the little system of his care.

The people who came here to this harsh, expansive, lonely landscape got the job done with hard work and determination and not a little self-confidence, and perhaps have truly earned those bragging rights.
Tomorrow I am headed for Santa Fe where I will spend the night in our neighbors’ home there. I am looking forward to getting out from behind the wheel of a car and into the landscape.