We planned a drive five hours south of Santa Fe through Las Cruces, New Mexico and the sprawling  White Sands Missile Range to reach the blinding white sands of the Monument.

Along the way we drove through desert interrupted by only a few small towns. In one of them, Socorro, we met a troubadour named Tom who was singing Bob Dylan’s Don’t Think Twice, It’s Alright when we pulled up. I listened and watched his playing while Barb and Cori went in for drinks. I learned that A: he really doesn’t have a girlfriend, B: that he is a Vietnam vet and still carries the backpack he humped through the jungle in 1972, and C: if I practice just 10 minutes a day it will soon become second nature to find the chords on my guitar. 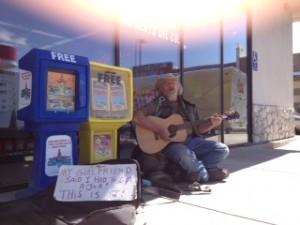 Beyond Las Cruces we entered the White Sands Missile Range, keenly aware of where we were. 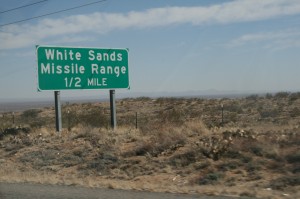 There is a lunar, desolate, otherworldly aspect to the unending monotony of desert on both sides of the road. I guess in order to launch a missile at something it must not look anything like home …

We stopped for an overview at the park entrance and bought a bright purple sled in the gift shop. How could we come this far and not go sledding? We drove Daytona- style through scrubby low dunes that  would make you swear you were in the Outer Banks, a blinding blue Atlantic just over the tops of them. Until you knew you weren’t… Soon all the vegetation was gone and we were engulfed by dreamlike mountains of  briliant fine white gypsum sand . Stunning. 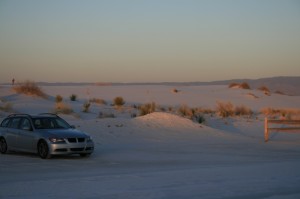 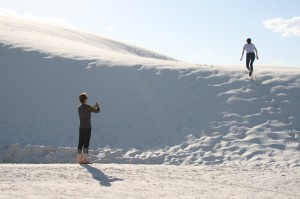 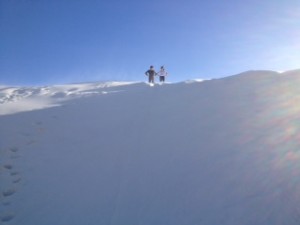