We were onto something from the minute we woke up.

First, a bike ride out to the Chinati Foundation to reserve our tickets for a tour. With that accomplished and 30 minutes to spare, we biked back down the road to Marfa Burritos for delicious handmade flour tortillas filled with beans and cheese for an authentic Texas breakfast. 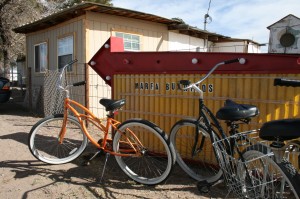 Barb and Cori entered before I did, roadside dawdler that I am, and I found them in the kitchen apparently ignorant of the sign requiring them to stay out of the kitchen, por favor. 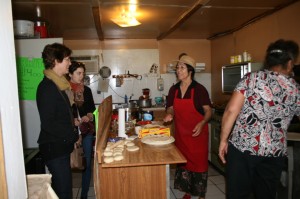 We were the only guests in the tiny dining room except for a regular we came to know as Ken Whitley, poet and storyteller, who had immediately asked Barb and Cori, “Where’s your third?” That would be me, the aforementioned roadside dawdler… Apparently he had already seen us and we didnt blend in with the landscape of Marfa natives as seamlessly as we thought we did.  We struck up an enjoyable and informative conversation and learned three salient facts: that his books were at the local bookstore and that we should read them, that we must acquaint ourselves with the pre-Christian Celt/Irish term thin place if we were to truly understand Marfa, and perhaps most useful of all, that the trip to Austin in the morning would take us “seven butt-hurtin’ hours” and that we should watch for all kinds of deer at that hour of the pre-dawn dark.

We toured the Chinati Foundation(so named for the neighboring mountains) that Judd founded to show his own work as he wanted it seen, and that of two friends, John Chamberlain and Dan Flavin. Its primary location is that of the former Camp Marfa/Fort D.A. Russell, originally a Cavalry outpost during the Mexican American War, and later an Army post during World Wars I and II.

The artillery shed that Judd converted to permanently house his large scale installations had previously housed German prisoners of war and  Judd left the signage on the brick walls to illustrate this fact.

den kopf benutzen ist bedder als ihn verlieren translates roughly to “it’s better to use your head than to lose it” and is signed in pencil underneath by Judd himself.

I searched the concrete columns supporting the coffered concrete ceiling (in my memory oddly reminiscent of the magnificent coffered ceiling at the Pantheon in Rome…)for carvings or writings that might have been left by those German prisoners. I did find palimpsests of scratchings and penciled figurings, but they were more likely left there during Judd’s renovation of the building.

Judd’s first Marfa-specific work can be seen out the windows of this former artillery shed. In a grassy field on a north-south axis is his untitled works in concrete which he created over a four-year period from 1980 to 1984. Inside, as you enter the shed leading away from you are 52 of the 100 aluminum boxes that comprise his permanent installation, 48 follow through an entry into the second part of this huge interior. Lemony desert light floods the room from large quartered windows on both sides. The light bounces off or is absorbed by the work depending on the time of day and the exterior of the piece. Although each measures exactly the same in its exterior dimensions (I forget exact size, but imagine about 4′wide x 6′long x 4′high), no two interiors are the same. The large milled aluminum rectangles are at once evanescent and solid. They are immanent, completely of this world,  and transcendent, completely beyond the words I must use to clumsily describe them.

No photography is allowed on the property, so my words must suffice. But.. I have to stop. I could go on and on and never finish this and get to the Vicksburg Battlefield I have come here to see…

Next we encountered the work of Dan Flavin which is housed in six U-shaped former barracks. You enter a door of each, walk down a white corridor to the light installations at the far end, the glow emanating from them alternately predicting or belying the colors you would ultimately face. Four shades dominate this work – flamingo pink with lime sherbet green and yellow-gold (think McDonalds golden arches)paired with cerulean blue. But unlike any other setting where I have experienced Flavin’s work, the bright desert light streaming through windows at your back is a perfect counterbalance.

We saw John Chamberlain’s work at a building in town, also part of Chinati, and although we loved the Marfa Barge, a huge shipwreck of a dropcloth covered giant sofa where we were invited to watch his film The Secret Life of Hernando Cortez, we did not like the film… and his work left us cool after Judd’s luminous spareness.

Lunch was at the roadside Food Shark where we ate our Marfalafel in the dining car of an old schoolbus and watched the trains pass through town. 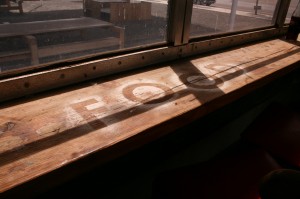 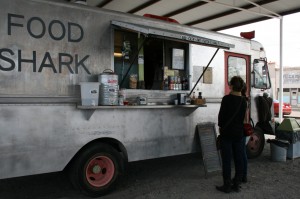 We visited the wonderful Marfa Book Company which did more to illuminate the mindset of this town than anything else. I coveted the esoteric, intelligent selection, but only made several purchases. Among them another copy of Sebald’s The Rings of Saturn, because I hadnt brought it along with me and had quoted from it earlier in my musings, and a book of poetry by our breakfast companion, Ken. 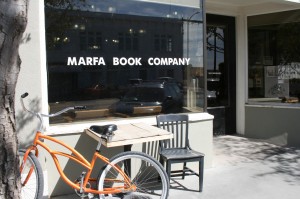 More bike riding to visit a gallery, 2d, a great space owned by Dennis Dickinson – www.exhibitions2d.com  - who welcomed us into his gallery as if into his home- with great hospitality and generous shared knowledge of his artists. A synchronous moment for me as the song I could not get out of my head and had been singing all morning long as we rode our bikes through the streets was playing at the exact moment we entered his office. Leonard Cohen’s Chelsea Hotel #2 , but sung this afternoon by Rufus Wainwright…

I was already thinking about how I could possibly describe this contradiction of a town and asked Dennis if he were to try the same how he would describe Marfa in a word or two. He thought for a moment and came up with a word that says it all, stealth, it’s a stealth town.

We followed our gallery visit with an illuminating tour of Judd’s private residence(although not the interior of his actual home) and outbuildings. My favorite was his extensive library which he housed in a large light-filled space bisected by a long table filled with his collection of rocks, shells and other artifacts and a bed, made of pecan? and covered by a white spread. (He had a bed in every one of his spaces. Our extremely knowledgeable guide described him as “a napper… and a lover.”) His books on art, physics, the natural world and literature are arranged as he left them, chronologically by the birthdate of the subject.

We capped off a wonderful afternoon with a drink at the bar at Padre’s just next to Judd’s home and were off for more exploration. 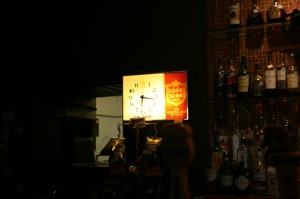 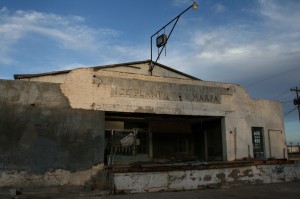 Dinner after a quick shower to wash away the heat and dust of the day was at Maiya’s, an Italian restaurant in town, where we recounted with gratitude our adventures of the day and began our long goodbye, a slightly tearful realization of an ending, (okay, Cori, might this be a slight understatement??)knowing we would separate tomorrow after our seven hour drive together to Austin.