Somewhere in the Arizona desert, I recounted to Barb and Cori that on the way out here to break the monotony of a mid-afternoon desert drive, I tried to come up with as many interesting road songs as I could hold in my mind at one time. We began thinking of so many- Cori even made us a playlist…but my all-time favorite for evoking the alienation of a long day behind a windshield, alone, driving, everything passing, receding and fading away like time itself…is Simon & Garfunkel’s America.

One of the songs I called out was Dylan’s Highway 61, Revisited. Friday, I made my way east out of Jennings, Louisiana to Baton Rouge and then north on that very road – Highway 61, the self-proclaimned Blues Highway, which roughly parallels the Mississippi River. I had the album on as an accompaniment to my drive, but the small, forgotten towns (in the first one, just north of Baton Rouge, a hand-lettered sign,slashes of angry white paint on a weathered blue wooden background: K.I.P.! YOUR SEWAGE TREATMENT PLANT IS KILLING OUR CHILDREN!) out my window seemed to have nothing at all to do with Bob Dylan and his plaintive voice – although I do love Queen Jane Approximately… I switched to BB King, Muddy Waters, and Robert Johnson-those voices echoed what I was seeing..

I hopped on and off Highway 61 to take the Natchez Trace Parkway, slowing down and driving through a park like setting of winding road through woods, fields and the occasional historic marker.I stopped at Mount Locust, the oldest surviving original inn on the Trace. Although it was only ten minutes before day’s end and storms were brewing, the ranger let me in for a quick walk on the very Natchez Trace that led to the door of the inn. Before the steam engine made travel possible back up the river, riverboatmen bringing their barges down the Mississippi had to walk home to places like Ohio and beyond. 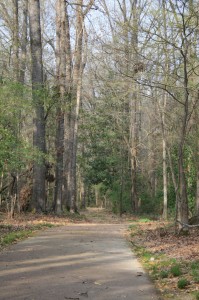 Disappearing into the tangled woods behind me was the very path that had begun as a buffalo path and was then used by the Choctaw Indians before theses traders also found it to be the best way to follow the river. Mount Locust provided a place to sleep and a hot meal for the weary. 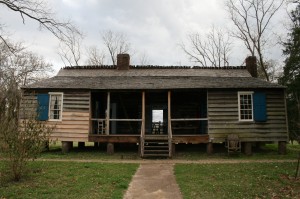 I made my way through Natchez passing through a haunted landscape. Brittle, empty fields. Silent, proud, white columned houses barely glimpsed down an allee of trees and the deeper silence of abandoned weathered wooden shacks. Perhaps it was the storm clouds ahead and to the west; perhaps it was all the tangled undergrowth beneath trees draped in grey moss; perhaps it was just my imagination, but after the blank openness of all the land I had just traveled through, this land held its secrets.

I made my way up Highway 61 into Vicksburg, Mississippi and reached my hotel across the street from the Park with ten minutes to spare before the heavens opened up.