I left Vicksburg Sunday morning and headed east across Mississippi to reach my destination for the evening -The Myrtle Hill Bed and Breakfast in Marion, Alabama in anticipation of discovering the Hale County of James Agee and Walker Evans. Of William Christenberry and of the Rural Studio. I was greeted there by the courtly Colonel Jerry Lewiss and his wife Wanda. They have carefully and lovingly restored Myrtle Hill, an antebellum home, built around 1840 and so named for its crape myrtles. They open the home and its extensive gardens to seekers just like myself. 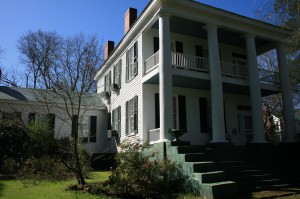 This summer I reread Let Us Now Praise Famous Men imagining the long-considered occasion of coming here, but never anticipating that my visit would be the last stop on a 7000 miles journey across the country and back. It ended up not being the last stop. My day here in Alabama was everything and more that I hoped it would be. So much so that I didnt leave Greensboro until dusk, leaving me to make my way back to the interstate to stay one final night on the road. Now I cannot imagine it any other way.

But, back to the first day…With a welcome cup of coffee left for me in the hall at the back door by Colonel Lewiss before he headed off to work, I sat on the back porch with my face tilted to the early March morning sun. A light dusting of yellow-green pollen coated everything I touched. In front of me was the antebellum kitchen that had been returned to its 1840′s appearance. 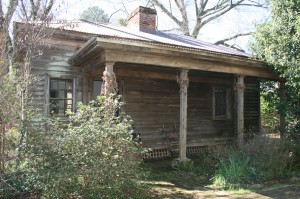 Wanda Lewiss explained to me that it had been the home of the kitchen slave who lived and worked there and made her way with food for the home under a covered connected walk that had since been removed but whose evidence still remained. Surrounding the kitchen and the house were gardens traversed by pea gravel walks. 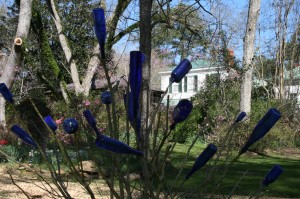 Azaleas, jasmine, dogwoods, cherry all about to burst with color. Beyond was gentle lawn that bordered the domain of a rooster who apparently did not think he was being given his due…

I headed out to Newbern to find the office of the Rural Studio hoping for an orientation and some directions to the projects in and around Newbern. My first stop was the Newbern Mercantile which seemed like a welcome(and only) place to stop and eat before my exploration. I entered a wooden floored general store that seemed to have changed very little since its inception in the 1840s.I had no idea of my good fortune until I took my grilled cheese sandwich and went outside, thinking to sit alone on a bench and watch the passersby.

Like a bird on a wire, I was joined first by one man and then another, and as our conversation became more and more enlivened, we were joined by others who seemed to want to compete with one another with stories of their own. Someone notice my camera and asked if I would take their pictures. I dutifully recorded addresses and will send the pictures to all when I get back and can print them. My first companion was James Robinson, who informed me that his were both the first and last words in the documentary Citizen Architect: Samuel Mockbee and the Spirit of the Rural Studio. 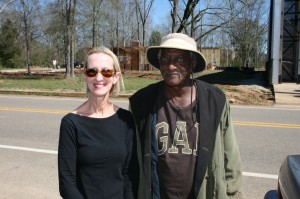 For obvious reasons, it had been on my mind the night before but I had been unable to watch it. James was born in Hale County in 1948 and has lived his entire live right where we sat. I learned more from his generous storytelling than I ever could have from any other source. 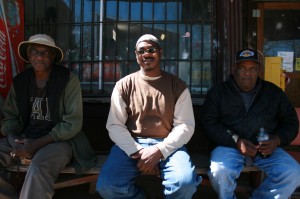 Just down the road from the Mercantile I stumbled upon and was allowed to stay and listen in on a class discussion of a project –  the vernacular credibility of the design of a handicap ramp in front of a proposed house – led by Rural Studio director Andrew Freear.

I left that building and walked down the sidewalk, heading south. As if I had dreamed them and were simply conjuring them on this sunny blue morning, I found myself in front of some of the very structures I already knew. They were ingrained in my mind as the incomparable photographs of William Christenberry. There it was – the ‘Green Warehouse, Newbern ,Alabama’ utterly unchanged from the series of photographs he made of this building beginning in 1973. 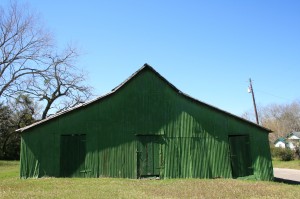 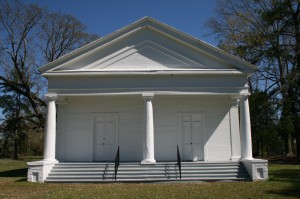 I drove down to the Morrissette House in Newbern where Rural Studio offices are open Monday through Friday and received a lovely welcome, a map and some helpful conversation.

I spent my afternoon in reverie driving through a poetic landscape, a place mindful of its past perhaps because it is all still so very present. Never knowing where I was going, but never lost.

I drove out to Masons Bend on the Black Warrior River and was taken in hand by the owner of one of the first houses created by the Rural Studio who showed me his and other nearby properties. Ever mindful of the privacy of the owners of these homes, my presence in their small community seemed unremarkable to all. 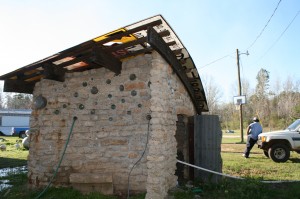 I stood in the Glass Chapel, a soaring open-air structure made from old truck and car windshields and red clay. 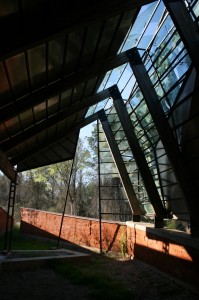 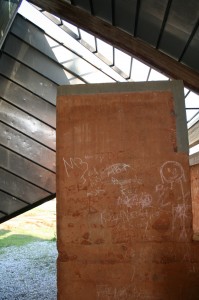 I walked through an old cemetery in Greensboro and sat before the Courthouse as James Agee and Walker Evans did 75 years ago until a setting sun reminded me that my day was over.

One last night to get it right.