Day 6: or What is the Opposite of Sublime? 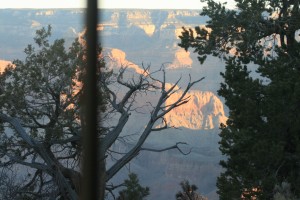 I started my second morning in the Canyon early so I could watch the light move down the walls one last time before I left. It wasn’t hard to do, since the picture window in my cabin opened to the world at the foot of my bed. It was really cold this morning, so I made a cup of coffee, lit the fire and watched from the sidelines (read:under the covers) until the sun came up. It seemed to take a long time this morning; the Canyon seemed subdued somehow. I imagined the few lingering morning clouds as harbingers of the snow that is coming in tonight, but they soon dissipated, revealing another perfect blue day.

I walked a little of the Bright Angel Trail leading down into the Canyon after a stop at the Kolb Brothers Studio. Named for the two brothers who lived and worked in the Canyon in the early days of tourism, the Studio now houses a bookstore. Among their other vocations, the Kolb brothers photographed the tourists riding the mules down the Trail and would develop the pictures for purchase by the riders as they returned from their trip.

I bought all the books that I wished I had had read before I got there. If I hadn’t had my head totally in the clouds, I would have stopped in earlier, but now that I have them I can read on the beach in Malibu and be all that more knowledgeable when I return!

Yesterday I fulfilled an obligation that has nagged at me for fifteen years. My first trip to the Grand Canyon was a brief,but oh, so memorable, adventure when our family took a helicopter ride into the Canyon. Imagine flying low over the desert on the approach and hearing the pilot say that the Canyon will be up ahead. With no frame of reference to know what “up ahead” meant, I craned my neck to see if I could see anything in the distance.  At that very moment, the ground fell away beneath us; we flew into the void, seemed to hang there for seconds (I wasn’t a cartoon watcher, but who used to do that? Run off a cliff and then hang there while it sunk in that he had just run off a cliff? The Roadrunner or the Coyote?) before we dropped through time. I will never forget the experience, but that’s another story and I need to get to the one at hand.  On that trip we landed at the bottom of the Canyon on land that belonged to the Hualapai Indians. I picked up a beautiful red rock whose color was the color of the Canyon in the setting sun to take home with me. As soon as I got back on the helicopter and could no longer put it back, I felt the creep of guilt at having taken something of spirit that did not belong to- or with- me. To deal with my misgivings once I got home, I did what every self-respecting person would do. I put it in a box and stashed it in a dark closet at my studio where it has remained- silent, but potent-ever since. Until, that is, this week when it made its return trip in the back of my station wagon all the way from Georgia.

I went to Hopi Point yesterday afternoon just before sunset and gave it back. I heaved it into the blue void and breathed a sigh of relief. This should make me feel better about what I did this morning.

I took a tiny, almost unnoticeable, little rock from the side of the Bright Angel Trail I was walking. Grateful for how the gods have smiled on me the entire trip – especially at the Canyon- I hoped for special dispensation to keep this tiny little remembrance for a very good reason. I walked back to the Trail from the edge where I had found it, admiring my find in the palm of my hand and justifying my actions… Just then, I was slapped in the face by the branch of the pinon tree I walked into while thinking these thoughts. Should I take that as a sign?

I have been listening on my drive to The Aeneid, which is full of the wrath played out against mere mortals by angry gods, so I am well aware that this kind of hubris could spell trouble, but somehow I trust the benevolence of the gods. (A side note to my return trip companions: Be forewarned that I am only four discs through this twelve disc story…)

I said my goodbyes, made my peace with leaving and retraced my path back down AZ64 to I40W. Traveling west through Arizona, headed for Las Vegas, I crossed through barren countryside. Some gentle hills -if you can call rock strewn hillsides and hardscrabble dead grass gentle, eventually gave way to a rockier landscape. Remember the kind of sandcastles we made out of a slurry of water and sand that was dripped – titrated – through the bottom of a clenched fist to create pebbly-looking  towers? The rocks looked just like that.

I saw my first tumbleweed in western Arizona. How cute it was as it gamboled across the expressway just for me! I should have suspected it was only a scout. I quickly came to feel that I was in a tumbleweed dodgeball game and I was on the wrong team! I escaped unscathed.

Leaving Arizona, I pushed through the desert of Nevada reading roadsigns for places like Chloride, Detrital Wash and Boulder City. Nostalgic for the musical sounds that name the places I am from and lamenting the unrelenting infinity of the desert. The desolate, gray land was made even emptier by the occasional trailer in the distance staking a sad dominion over an expanse of land – kind of an Anecdote of the Jar (Wallace Stevens) in reverse.

But that all changed so dramatically. Huge, craggy brown mountains appeared seemingly out of nowhere with others rising behind them in the deep, blue distance. The road rose steeply and fell away again just as suddenly. Nearing the Hoover Dam, I planned to push past and get to Las Vegas, but decided at the last minute to swing off the road and see where the river that carved the chasm I just left this morning ended up.

After walking across the Colorado River from Nevada back into Arizona on the walk along the Dam and back again, I decided to drive back and walk the new Pat Tillman Memorial Bridge that had carried me over the river to get there. The view was incredible and worth the detour.

Feeling as if I were entering a strange Oz, everything too bright, too crowded, too loud, too crass,  25 miles later I drove up the Strip in the late afternoon light. I will stay here for a few days before going on to Malibu and completing my trek across the country. Until then. I thank you for joining me on this trip. 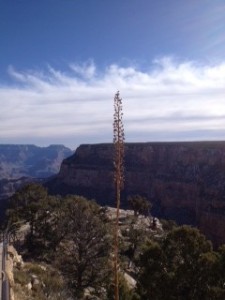 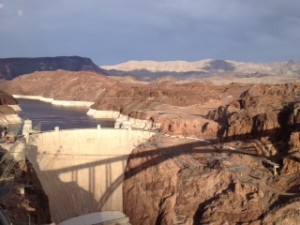