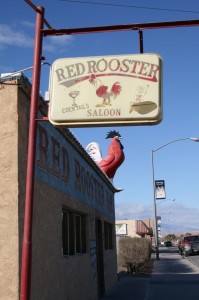 In the civilized confines of a spare, sleek apartment high above the Las Vegas Strip, I cooked up a plan this morning to go in search of Michael Heizer’s earthwork, Double Negative.  Only 60 miles north of Las Vegas on a drive through the desert, then through the Moapa Valley and onto the Mormon Mesa. The world changes utterly only five miles north of town. Gone are the garish buildings, the signs, the clutter, the artificial. Gone is everything, leaving only dun colored chaparral and ribbons of blue violet mountains in the distance.

I left with the directions I had written down in my trusty notebook and the caveat that there was a very strong possibility I would not make it to the finish line. All websites warned of steep sand and gravel roads, rocky enough that they required four-wheel drive vehicles and an undercarriage higher off the ground than mine. I decided to see how far I could get. Even if I didn’t make it all the way, at least I would have tried. I am beating back the sense that these three days of comfort have made me soft.

After only 45 minutes or so, I pulled off the expressway and followed a gently curving road that rose and fell through the valley for ten miles or so to the foot of the mesa. Turning onto Mormon Mesa Road, after a few miles of paved road, I passed the tiny municipal airport where the paved road ended and my climb began. I drove through sand as soft as a beach with the desert stretched out on both sides approaching the flat-as-a-platter-mesa rising directly in front of me. Reaching the top, rigid back, white knuckles, and breathing my first sigh of relief , I was instructed to cross over my first cattle guard (or was it to be my second? I had omitted this detail from my notes…and I first had to learn to identify a cattle guard.) Next I was to drive 1.3 miles to where I would get out of my car and walk 50 yards to the east and there it would be! I carefully followed directions to “stay on the mesa.”  Where else was I to go?

I marked 1.3 miles rock by rock, but saw absolutely nothing that would indicate I was where I was supposed to be. I drove on. Same thing. Fortunately, my phone was working, and even better my friend Cori answered her phone when I called. She had been there once before and I thought she might be able to allay my fears that I was not where I was supposed to be. She tried her best to remember her own visit and to understand from my description exactly where I was.

Thinking I had taken a wrong turn -there were only unmarked dirt roads up there and they all looked the same- I decided to retrace my steps and see where I might make a correction. I looked north over the mesa and saw angry purple clouds hanging low in the near distance. If a sudden rain fell on the roads I had climbed, there was no way I was going down the same way I came in  - and there was no other way.

With great reluctance and an unusual display of caution, I headed back down the mesa. I was a little spooked by the total isolation of the location and the evidence of off-the-grid activity. Rusted out car parts, broken beer bottles, spent shotgun shells, and what looked to my unrestrained imagination and untrained eye like something sinister. Perhaps the makings of a rudimentary meth lab – the shell of a double sink, both basins blackened, unmoored and listing on the desert floor, broken bottles, also blackened by what had been inside them or by fire,  the remnants of fire circles that looked much more functional than recreational..It all looked too purposeful. The landscape was hostile. Something in it made me feel unwelcome.

This was not to be my day to see Double Negative. There will be another day and  it will be the right day.

The small town of Overton, Nevada settles like a rockslide at the bottom of the mesa. One street runs down its center with buildings that speak of a much more lively past. Old motor courts, now abandoned, once enticed passers-through with outsized cheery signs promising air conditioning. A small cafe was closed. Gladys’ Beauty Parlor advertised with a faded sign that was barely legible. Two businesses showed signs of life. The Red Rooster Saloon and a McDonald’s, where I stopped in  for some iced tea for my trip back to Las Vegas.

I asked ten people inside the following question: “Have you ever heard of Double Negative?”

One said, “You mean like film?” When I gently explained the concept of the earthwork, he excused himself by saying he was from Idaho. 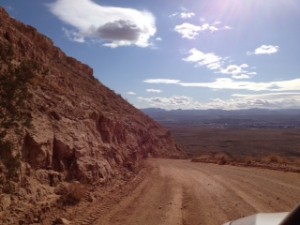 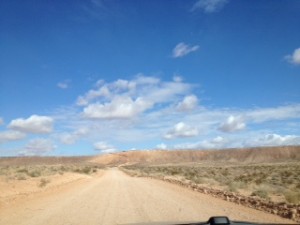