We left the Grand Canyon on a bright Saturday morning heading for parts east to drive the 475 miles to Santa Fe, New Mexico. Along the way we encountered many a distraction, but pulled off for only one. Just outside of Winslow, Arizona (and, yes, we sang along with Jackson Browne…)we saw the one that we could not pass up…Signs pointed the way to Meteor City, site of one of the largest meteor craters in the world – Just six miles off I-40. We debated, should we?, should we not?, since I really wanted to reach Santa Fe by dark…but ultimately, we opted for adventure and I swerved off the interstate and onto the road that would take us through cattle farms and onto the family-owned site of Meteor Crater.

Passing signs warning us of cattle guards and baby calves in the road, a large round sign proclaimed our speed limit to be 55 mph, but advising that 40,000 mph was acceptable for meteors…

50,000 years ago a meteor streaked out of the northeast sky and crashed into this desolate desert creating a crater that measures almost a mile across and 700 feet deep. We saw it from above after climbing stairs in winds that almost blew us over. It was an experience we will never forget – a reinforcement of our own impermanence in the face of the mightier powers of the universe.

We finally arrived in Santa Fe- in the dark, and long after we had hoped- to find the lovely, warm and welcoming hilltop home of my generous neighbors Kelley and Neil. Its quiet,calm embrace was the perfect antidote for the blur of a long day’s travel. Thank you, Neil and Kelley!

We only had one day in Santa Fe and we decided to get out and see the countryside in the best way we knew how – on the back of a horse. Barb made a wonderful find! Broken Saddle Ranch in Cerrillos Hills, 45 minutes from Santa Fe. Harold takes such care with his fine horses and his clients and we knew immediately that we had scored. Our more than able guide, John, made the day for us. Guiding us up the grassy hills of the Cerrillos Hills State Park on our horses Watson, Queen and Red, we learned about the natural and cultural history of this wild and beautifu l area. He expressed interest that we were on a road trip back to Georgia and mentioned that he had been on a road trip of his own. I’ll say… He came to New Mexico from Michigan on horseback. Riding one horse and leading another as a pack horse with his wonderful, loyal cattle dog Sheila walking by his side, he took six months to get to his new home. He stopped where he could, tied his horses up at a Walmart or a grocery store when necessary, and slept wherever he found a place to rest. Along the way he picked up a puppy that he kept wrapped in a flannel in his saddlebag. We were lucky to meet both of those special dogs, Sheila and Rudy, at the Broken Saddle Ranch where he settled.

Later that evening and back at “home” we walked down the hill to town for a nice dinner together in Santa Fe and back up again under a velvety, starry sky for a good night’s rest in advance of our drive to the White Sands National Monument near Alamogordo, New Mexico the next morning. 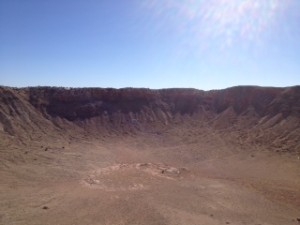 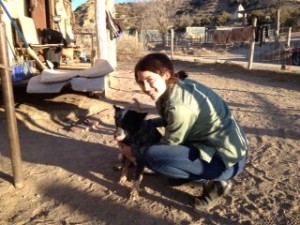