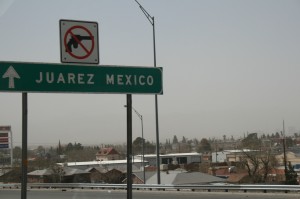 we traveled on a narrow desert highway to its remote southwest tip. Donald Judd selected Marfa for its rugged beauty, for the light, and for the horizonless desert landscape, but integral to his decision was its remote location. He had passed through here on a stint in the Army in the early 1950′s and had sent his mother a postcard with the simple observation, “beautiful landscape.” When considering where to settle to create the art he became so well know for, he wanted to live as far away from any large town as he could and remembered Marfa. 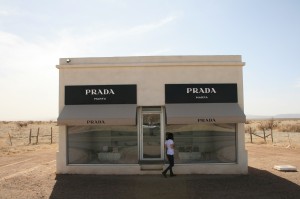 Reaching the almost abandoned town of Valentine, Texas(pop. 217) just a few miles west of our destination, we stopped before the the now iconic roadside image that many associate  with Marfa.  Having now seen both the town of Marfa and the Prada Marfa ‘store’ that is its roadside introduction, I can say that the mocking, self-important “irony” of the piece is off-putting and entirely misrepresents the unselfconscious authenticity I came to see in the town itself. 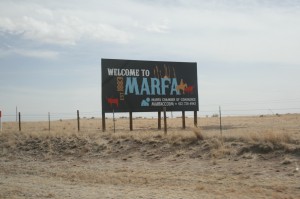 We were delighted to find that our Thunderbird Motel lived up to its reputation.  The architects Lake/Flato gave this classic U-shaped 1959 roadside motel a clean, modern aesthetic deserving of all the attention it has received in the architecture/design community. We  checked in at the office across the street(1959-style), walked back over to our rooms, threw our bags down and hopped on our bikes to explore the town on a warm, windy afternoon. 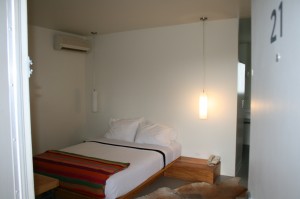 After only 5 minutes on our bikes, we each came to the same conclusion: There was no way we could experience this town in only one short afternoon. Without hesitation, we scrapped our plans for the following night in Austin in favor of a second night here after I vowed that being here was worth getting up at 4:00 on the appointed morning of Barb and Cori’s 1:30 flight home from Austin seven hours away. No question about it. Yes, it really is that kind of place…

The Chinati and Judd Foundations were not open until the next day, so we spent our afternoon biking through the town and all over the crazy landscape. Barb wanted to see El Cosmico a “motel” that resembled to me nothing more than a crash landing in the desert of a few colorful Airstream trailers, yurts and tents. We were told, “Go past a real trailer park, but dont turn in there. Turn in at the next one, and you’ll be there.” 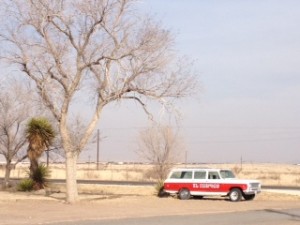 We stopped for a bite to eat at the only place open at that late hour of the afternoon and sat on a bench enjoying our cheese and hummus and water and watched the locals come and go, including one free-range Rasta dog with hair so matted he carried his own saddle blanket. 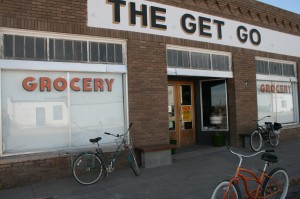 Dinner that night was al fresco beside the fountain in the courtyard of the Paisano Hotel built in 1929 when Marfa was a thriving railroad town, site of the filming of the movie Giant in 1956.

We biked home through the dark streets of town to settle in at our clean, quiet and comfortable rooms, the empty night pierced only by the lonesome whistle of passing trains behind us and the lumbering cattle trucks on the highway in front of us. 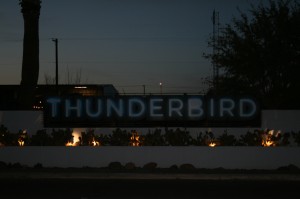