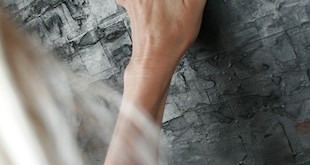 Photographer Abelardo Morell is an alchemist who has made magic from the scientific principles of light for over 45 years. A retrospective of his work containing more than a hundred photographs at the High Museum of Art leaves no doubt that he is also a poet.

Abelardo Morell: The Universe Next Door opens with photos of common household objects and domestic interiors that Morell began making after the 1986 birth of his first child. It was a time when he began to look at ordinary reality, his new reality of the family home and a son and, he said as he toured the exhibition with ArtsATL, to “begin to deal with this world, to record it and to meditate on it.” Looking deeply at the intimate and familiar in his life transformed his emotional sense of himself.

That early work deepened his interest in how we decipher the world through optics, including the camera, and led him to consider the optical properties of water and objects such as a wine glass or his own eyeglasses. Morell, who studied photography at Bowdoin College in 1969 after having failed first-year physics, said, “Ordinary folk physics was important to me. Not the esoteric kind, but how children look at things.”

These concerns also led him to make pictures about photography itself. Light Bulb, a gelatin silver print from 1991, is a seminal work. Wanting to demonstrate photographic principles to his students at MassArt, he constructed a camera obscura from a cardboard box open at one end, a lens and some duct tape.

The camera obscura, known since antiquity, is a phenomenon in which light moving through a small opening into a dark room will bring with it an image of the outside world The image, upside down and laterally reversed, appears on the wall opposite the light source.

Morell positioned his camera obscura before a light bulb and photographed the entire contraption, including the dreamier, inverted twin of that light bulb glowing on the back side of the box.

Light Bulb came out of his desire, he said, “to make something poetic and beautiful and perfect, even though it is just a stupid box. Not an elegant thing, but it produces beautiful things inside.”

This idea got him thinking about using an entire room as a camera obscura. He started with his bedroom, amused at the thought of his neighbors wondering what was going on in that black-draped space. He and his wife would wake to the dream of the outside world on their white sheets and the pale wall behind their bed. He recalled lying in bed together watching a black-and-white inverted movie of neighbors walking upside down on outside streets and squirrels walking on telephone poles. His photographs of the room portray the magic he made.

He expanded his experiments to the anonymous spaces of hotel rooms and institutional sites such as museums and office buildings. In one black-and-white image, the interior of a Times Square hotel room is virtually draped in the vivid, kinetic graphics of the signs crowding the famous square beyond the room, emphasizing the quiet stillness of the empty room in comparison. In another, the Empire State Building falls across white sheets of an empty bed like liquid platinum or silver lamé, while the rest of the skyline, blurred and upside down, hangs on the wall of the room.

In these works, the rational and the irrational are invited to exist in the same room. We can consider this quality of Morell’s work in the context of Surrealism, in which bizarre and unexpected combinations left room for the unconscious to express itself. André Breton expressed the idea of startling juxtapositions in First Surrealist Manifesto (1924), taking from a 1918 essay by French poet Pierre Reverdy: “The more the relationship between the two juxtaposed images is distant and true, the stronger the image will be — the greater its emotional power and poetic reality.”

It is just as easy to situate the work in magical realism, that genre in art in which magic or magical elements inhabit an otherwise mundane environment for the purpose of deepening our understanding of reality. The world that comes to us through Morell’s photographs arrives changed by the artist having seen it first: a lyrical delivery of the “observer effect” in physics (that the act of observation alters the thing observed).

Luc Sante, who wrote the introduction for Morell’s fourth book, Camera Obscura, commented that it is “as if he had taken his camera into the dream state and emerged with proof of what he saw there.” This is photography as visual counterpoint, and as such, seems more about the relationship among the objects in a photograph than about any single subject.

In later pictures, he shot in color and used a prism to right the image coming through the opening. In one standout, it seemed to me that a ruby-sheeted bed dreamed of the Brooklyn Bridge. In another, potted plants in an Italian room longed for the wildness of the natural garden outside, which is portrayed on the wall behind them.We witness the secret life of objects, where interior and exterior inform the other in gorgeously ambiguous un-resolution, generously allowing room for the viewer to create his own world. An entire landscape enters the confines of a single room to dazzle and disorient us: we wonder, as did Leonardo in his Codex Atlanticus, “Who would believe that so small a space could contain the image of all the universe?”

In 2010, Morell began experimenting with a portable tent camera he created from a yurt-shaped tent topped with a periscope lens designed to project the outside landscape onto the ground beneath the tent. Some of the most potent images in the exhibition come from this series he made of the grandeur he saw at places such as the Grand Canyon, Yellowstone and Yosemite. Morell delighted in these photographs, noting that the composite of the ground itself played with the view and observing that he looks for a way to create “a new layer of meaning under the images.”

An inherent sense of the sublime here echoes that of the 19th-century photographers of the American West, Carleton Watkins and William Henry Jackson, and recalls a beauty so awesome that it could only be conjured in dreams — or memory. André Aciman, Egyptian-born memoirist, essayist and self-described exile, believes that an exile reads time, memory and beauty in the “key of loss.” Morell’s early displacement from Cuba — his family left everything behind in 1962 when Morell was 13 — seems to inform a sense of inchoate longing that infuses much of this work. As a boy in his small seaside town of Guanabo, he immersed himself in the cowboy movies of the American West, and recalled an expansive sense of possibility in that unfamiliar country to his north. That sense of boyhood wonder comes through in these photographs.

In one, Old Faithful erupts before a line of onlookers. The pebble-strewn ground onto which the image is projected calls to mind the flying debris of an explosion — or the graininess of an old black and white movie.

Included in the exhibition are photographs about optics, paper and books. Supreme among them is Shadows During Solar Eclipse (1994), which Morell made of the myriad images of a sun in eclipse as seen on the ground beneath a leafy tree. The light piercing the openings created by dense leaves had the effect of thousands of pinhole cameras. Miraculous. Aristotle had seen the same effect through a handheld sieve over 2,000 years ago. Morell’s photograph carries the same wonder of discovery.

Morell is drawn to the symbolism and malleable meanings of paper — maps, money or stacks of paper. Among his “book pictures” is a photograph made of Dickens’ A Tale of Two Cities. The book’s opening pages are translucent; words from one page shine through to the next, creating a palimpsest of thought and meaning. Many of these photographs feel more direct in approach and, as such, carried less emotional appeal than other series.

Also on view are photographs the High Museum commissioned for its Picturing the South series. It includes four camera obscura images made in Atlanta hotel rooms, but Morell was clearly most excited about a new series of trees photographed here and elsewhere in Georgia and Tennessee.

Challenging himself to “make new what had been done so well in the past,” he incorporated frames, mirrors and cutouts he made in reproductions of sylvan paintings through which he photographed the real thing. He likened his composition to collage — what he described as “things behind speaking to things in front.” They reflect the sense of discovery and delight he claims to have felt when making them.

Abelardo Morell reveals the beauty to be found in the balance of opposite or discordant qualities. His work is about perception, looking deeply and truly seeing. It is work about contradictions in equilibrium — technical/conceptual, reality/dreams, inside/outside, upside down/right side up.

That we notice only the balance and not the contradictions is testament to Morell’s balletic ability to move between them. He learned form by watching his parents dance, and it shows. The exhibition title draws from the lines of an e.e. cummings poem: “listen;there’s a hell/of a good universe next door;let’s go”

He could have lived next door to Abelardo Morell.

Abelardo Morell: The Universe Next Door was organized by the Art Institute of Chicago in association with the J. Paul Getty Museum, Los Angeles, and the High Museum of Art, Atlanta.

Morell will speak at the High Museum on March 6. Click for information