We spent the late morning walking the neighborhood. Gusty winds that made our umbrellas useless, sporadic blowing rain, rivers of bright yellow leaves along the curbs and lots of dogs in raincoats. Central Park is closed and looks forlorn. 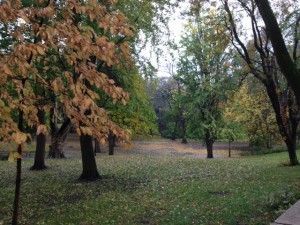 Almost all of the stores along Amstersdam and Columbus are closed, many are boarded up. A few eateries are open with lively patrons inside, a sense of excitement in the air. Taxis only on the streets and avenues. No subway. No buses. 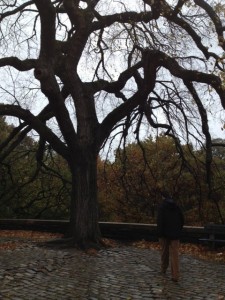 All day we enjoyed being out on the streets even if we were soaked to the bone by the blowing rain. It was a day not unlike any other bad weather day until tonight. Tonight winds really picked up and became something we reckoned with as we hurried to dinner. We dined on Amsterdam Avenue at one of the few restaurants open and from our table by the window watched sheets of rain blow horizontally down the avenue. Paper bags flew by at treetop level, the few walkers still out were ushered down the sidewalk with gusts at their backs, and car after car of NYPD filed up the street in a hurry somewhere. Inside we were grateful for power, good food and wine on this remarkable night , for the people who had stayed on the job so we could have a great dinner – and for each other.

As we walked back to our apartment, Anna and I stood in the middle of an empty Amsterdam Avenue at only 9:00 in the evening. 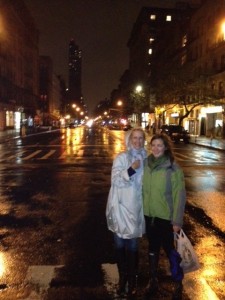