the calm after the storm

there is a sense of melancholy today in the grey aftermath of the storm. the anticipated event is over. the clean up has begun. businesses and restaurants are still closed, but on the upper west side we are all high and dry and so much more fortunate than most. 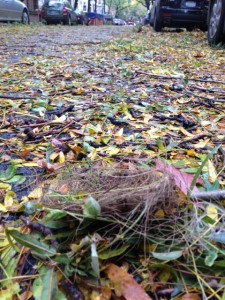 we walked out of our apartment this morning and entered a movie set. everything seemed hushed. columbus avenue had ceded its bustle to pedestrians. cue the old couple, arm in arm crossing the street. cue the young family, one puffy coat bundled child in tow, another in a stroller. cue the joggers escaping cabin fever, the dogs pulling their owners down the street. the light was off somehow. yellow leaves that had muted much of the light just yesterday now carpeted the narrow streets 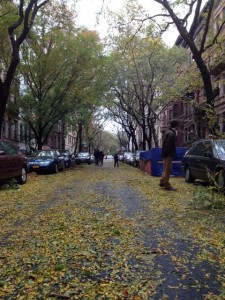 we walked for blocks and blocks to see the damage from the winds we had heard in the night. the howl was unlike anything i have ever heard- shrill, insistent, plaintive, constricted. every other storm i have experienced announced itself from far away, but here in new york city the dense architecture created a maze for the winds.

as it turns out, i think we were walking home from dinner in some of the worst of the wind last night, but it got so much worse for so many after that.