ballad of a place  for Groundstory: tales from the shade of the South

The act of recollection is integral to a sense of place. It is an abstraction and a creative act.  We must call on history, fiction and memory to sustain it.  The stewardship of several hundred acres of almost forgotten land in middle Georgia came to me four years ago upon the death of my father. It is a family place about which I knew very little except that my grandfather had farmed it and it meant enough to my father to save it from auction at the hands of his brother when I was young.

I have followed the thread of the history of this land as far as records can teach me, and there is no one left to tell its story.  I believe it is part of a larger parcel of land that has been in my family since shortly after the Revolutionary War.

I create a new fiction each time I imagine its past.

But of memory, the element crucial to a sense of place, I have none.  My father didn’t talk about it. He left his small town for college at 16 the same hard year his father died.  I have no memory, very little history, and only the stories I have made for myself, yet I have a strong sense of this place and its past as my own and a tie to the land as something animate.

To learn what the land might tell me, I recorded 80 hours of audio over a span of several days and nights in August of this year. I hung microphones in two locations in the deep woods and in a stand of rustling cane beside a dirt road. I left one under an umbrella staked in the middle of a soybean field, and recorded the night sounds from inside an old cabin that has all but returned to the ground.

The recordings captured an abiding presence of life and animate nature. Sound as equal parts transience and permanence.  Each one fleeting, yet little changed over the years. Sound as memory, belonging to the past.

The sound revealed to me was vibrant and varied.  Wind rising in the trees with approaching rain and distant thunder, morning birdsong, the nocturnal call and response of owls and faraway dogs, footsteps unseen on dry leaves, the seesaw of katydids, my own voice. But after all of it, I was still only a visitor, a stranger, insignificant. The land kept its secrets.

This construction is designed as metaphor for the ultimately ineffable quality of place and of the past.  It evokes, but does not name. It is present, but not accessible. It is unreachable and unknowable and the embodiment of memory. 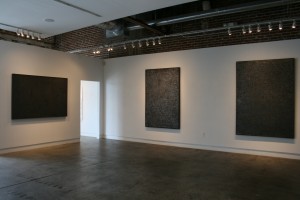 In a work of art, according to the poet A.R. Ammons, “a world comes into being about which any statement, however revelatory, is a lessening.”

I first invoked this characterization when attempting to formulate an adequate response to a friend’s piercing and evocative poem.  I paraphrased Ammons as he himself had echoed Lao-tse.  “A poem becomes an existence about which nothing can be said in words worth saying,” Ammons advised.

Although I ascribed a prosaic title to these four works, I have come to regard each as a poem rather than a painting.

I have often compared my process of art making to the act of creating poetry.  As with poetry, my work is a physical, visual means to a non-physical, non-verbal source.  A poem often lends an order to its materials and aspires to transcend them as I have attempted here..  I have relied on my process of accretion and reduction, and of distillation, to aspire to the ineffable quality of a made thing.  I worked on only these four pieces for over a year – often, in a day, either smothering or abrading what had taken me months to create.

I filled my studio with Gregorian chant.  I hope that its mystery and composure is inherent in this work.

I listened to the hypnotic music of minimalist composers and I now see that pattern, pulse and reiteration reflected here as well.

My writing table is lined with books of poetry that I stopped to read when I exhausted myself with the physical work required to create these surfaces.

The act of writing a statement to accompany a body of work is always the last step in the process for me –a lessening- perhaps because it is so difficult to find the language for what I hope it already possesses. 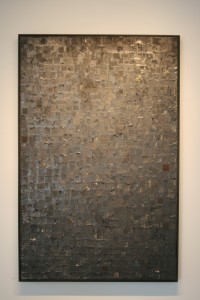 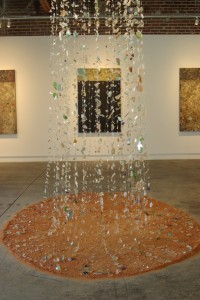 I have spent the last year “finding again the world” where I grew up. The land beneath Lake Lanier in North Georgia had been home to Cherokee Indians and the Mississippian Indians before them and to the settlers who followed them both. When the Chestatee and Chattahoochee rivers were dammed to form the lake in 1950, the lowlands were never to be seen again. Houses, barns, farms, churches, and graveyards were moved and saved or left behind and lost forever. Indian paths, hunting grounds and gathering places were covered beneath the rising waters of the rivers.

During a recent historic drought, lake levels fell dramatically and land previously under as much as 20 feet of water again saw the light of day and surrendered evidence of lives long past. I felt a responsibility to imagine a new life for these messengers of other lives. With this body of work I have attempted to honor the beauty of lost things.

The almost 5000 glass shards that make up the center installation were gathered where they were discarded 60 or 100 or more years ago. I found much of it behind stone foundations of former homes or around circular stone hearths.The red dirt is from the ground that later became the lake bed.

Other artifacts serve as poignant reminders of what came before – a porcelain doll’s arm, a Cherokee pottery shard, arrowheads, a favored delicate pottery, and sturdy Southern crockery.

The collaged paintings, some with as many as 20 layers of paint, refer to the archaeological process by which I found the artifacts – the alternate covering and uncovering in order to find what is beneath. 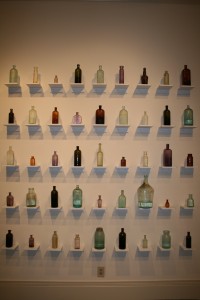 The swollen waters of the Chattahoochee and Chestatee Rivers tumbled out of the north Georgia mountains and rose to the doorstep of my hometown when they were slowed to form Lake Lanier in 1959. My story begins here.
As a child, water was a place to explore, to cool off, and to dive for shiny rocks on the silty bottom of the shallow end of the lake never far from my mother’s watchful eye.

But then I discovered the deep end…the delicious feel of jumping off a dock into green-brown water, warm at its surface and quickly cooling to an almost forbidden cold at its deepest reaches.

Knowing that the rivers which created the lake had flooded farms, churches and graveyards always made me feel like a bird or an angel when I swam. Where I floated on the lake’s surface had once been someone’s sky…

How can I relate the indescribable lure of following a curving gravel road at dusk through tunnels of deep green until it opened at someone’s lakeside cabin where the water changed to satin as the light faded from the sky and the summer night waited?
How to capture the ineffable bearing of a pale sky over still water, each reflecting the other’s beauty?

How to convey the singular feeling of solitude, but never alone-ness, with the deep-woods music of a mountain stream rushing to join up with another somewhere far away?

I have spent much of my work life conjuring these places where I was most myself. Although I spend my days in a downtown studio with sweeping views of a hazy city skyline, my mind is always trained on the cool, grey-green quiet where I learned my place in the natural world.

James Dickey beautifully conveys this exile’s sensibility in his poem of memory and lost love:

Believing that nothing is really lost, I decided to pick up the strands of memory and follow them back to the source. Naming each and every place I remember being in water – at least within a circumscribed distance from my childhood home – I mapped out a plan to revisit each one. Perhaps by gathering relics and even water from each place, I could understand the spell cast on me so long ago.

The past has proven to be inscrutable. I have failed. The water from a cascading waterfall that I have stilled in an old bottle bears little resemblance to its former self. Just as the bones of a saint in a gilded reliquary fail to define the man, the water I collected is, at best, a mute witness to my pilgrimage.

Surely there is reward in trying. I reveled in the unchanged beauty and wildness of the places I remember. I read and learned much. I traveled all over north Georgia, walked miles through forests and waded in streams alone with my thoughts. I even found evidence of my earliest creative efforts when I discovered the remains of a dam across Slaughter Creek that my friend June and I stacked 35 years ago hoping to form a nice swimming hole.

I was accepted back into the sanctuary of nature. Entering at seven or 17 or 47 made no difference. Time matters not to nature. What is 30 years to the worn rocks of a stream bed or the lichen-covered boulders on a mountainside or the water tumbling down paths carved millions of years ago?

I carry it all within me. That is everything – and enough 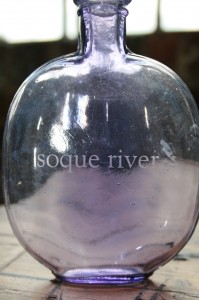 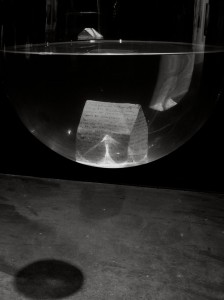 With this installation, I have searched for an elegiac sense of upheaval and loss. I have tried to make tangible the idea of memory—the sense of something present but submerged.

In a darkened room, you take a metaphorical walk through the poetry of loss as something ever present, but no longer attainable. 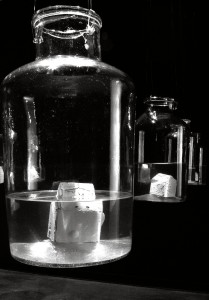 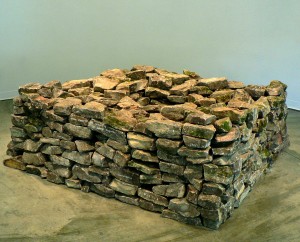 The poet Mark Strand perfectly answered the question I asked myself upon undertaking this project: how to “urge the harsh syllables/ Of disaster into music.” How to “turn pain into its own memorial.”

Epigramma is the Greek term for “inscription.” The epigram began as a poem compressed enough to fit onto a memorial or monument. Precision of language, as in all poetry, has always been the hallmark of the form.

With this idea as a reference, I worked to capture disaster by reducing the idea to its essence—a compressed poem of the unrecoverable, the rubble of lost things and the abiding human desire to mark a tragedy and leave something behind.

These rocks whisper their tragedies. 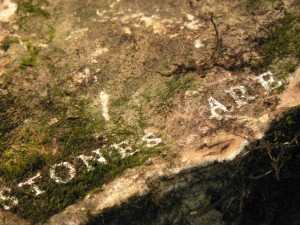